This year for Christmas I decided to do some sewing for the Littles.   They both love to help me in the kitchen and having a cute apron would just add to the fun factor of that.  I still remember the aprons that my mom made for us when we were kids helping her.  I loved putting on my apron and playing “cook” – even when my mom was still in charge of the kitchen.

Aprons used to be an integral part of a women’s dress each day, keeping her clothes clean while she worked around the house.  While many women do still wear them, it almost seems to be a fad that has fallen by the way-side.  On my own part, even though I sewed myself one last year (and plan on making more) I often forget to put it on and have ruined so many shirts because of it.  There’s a reason we wear aprons! 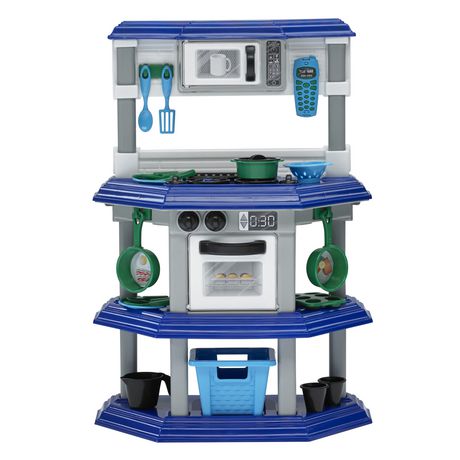 Little Miss’s big gift for Christmas this year was a little kitchen set.  Both the Littles love playing with toy kitchens and I had been wanting to get her one for a while but it had never worked out before.  I didn’t want a huge thing, as I hate toys taking over our house, so I was pretty pleased when I was able to pick up this little kitchen (in different colours) pretty cheap before Christmas, along with some food items and dishes.  But, I knew I wanted to add an apron to the present (even just for helping mom in the real kitchen).

I scoured Pinterest for many days before diving into making an apron.  Having a pretty good background in sewing now I had a general idea of how to put it together, but I wanted it to have cuteness factor as well (she’s a girl…let’s face it, they love cuteness).  I didn’t see exactly what I wanted, but I got the general idea of how to make it and decided to put my own spin on it.

This is the finished product:

I had seen some women’s aprons that had the gathered top part and decided I wanted to do that with Little Miss’s.  The only problem was, I wasn’t sure how wide to make it to give the proper gathers.  I made double the width of her chest, but I almost feel like it could have had a couple more inches for a  more gathered look.

The main part of the apron I made in an oval shape and had actually planned on adding lace to the edge, but forgot to put it in when I sewed the front and back together.  One of those grrr moments – and I wasn’t taking it apart to actually do it once the whole thing was sewn!

I attached two long straps to the top part of the apron and added velcro to the ends and to the sides of the apron, that way the straps could loosen as she grew.

Kitchen Sewing: What I Disliked:

The other neat piece that finished off this ensemble was a chef’s hat.  And seriously, Little Miss loves this part of it.  She is only 2, so she struggles with getting it on, but overall, it’s awesome!

Again, I scoured Pinterest for ideas on this one.  I saw a great website with a cute-looking one, but it didn’t have a tutorial, so I had to keep looking.  I found this great tutorial from Ikat Bag on How to Make an Adjustable Chefs Hat.  It was really easy to follow.  The only issues I had was getting the hat to gather.  Traditionally, I have done a large basting stitch and then pulled one thread to make the gathers.  Unfortunately, when I tried that my thread got stuck and ended up breaking on me.  Then I tried using elastic thread.  That did not work, either.  To be honest, I think the tension on my machine was having issues.  Finally, I put the tension as tight as it would go and put the hat back through the machine and ended up getting it to gather enough that I could get the band onto it, and just added a few more tucks as I sewed the band on…and it worked.   I love having the velcro on it to make it adjustable.  If she has friends over they can wear it, etc.

For Little Man I gave him a different look with the apron.  I had some really cute cowboy material and used that to make him a more boyish apron.

He loves to help me in the kitchen and this way their clothes won’t get ruined if they spill oil or anything on themselves.  His was made following a tutorial (loosely) from Patchwork Posse.  I had more than a fat quarter, so I just made my own measurements for how big I wanted it but patterned it after her tutorial.  Instead of making the back bigger than the front and having a wide edge on it, I made both sides the same size (say that 10 times fast, haha), sewed right sides together, and turned it out (don’t forget your two side ties in there and the top one).  I also added two D rings, to make the top adjustable so Little Man can get it on and off his head easier.  If I did it again, I might leave off the D-rings and just use velcro and do one long tie on one side that wraps around and velcros to the other side so that he can get in and out of it himself (he is super independent).  But overall I was pretty happy with how it turned out.  I didn’t get his hat finished in time for Christmas but it’s cut out and ready to go.

I get the impression the aprons are a hit. =)

Join me for more fun tips!